My quest to become a morning person... 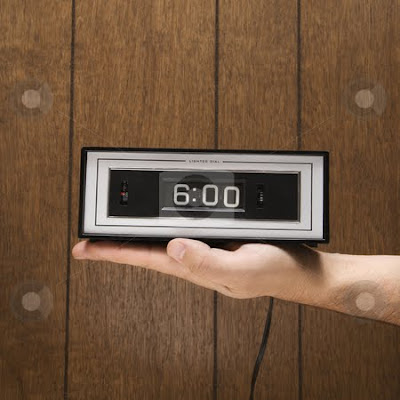 I feel like I'm at a bit of a cross-roads in my life. It's not as dramatic as it sounds, but it is true. My boys are starting the transition to taking one nap instead of two each day. After some hard work they became wonderful nappers and I loved my breaks. I didn't love how isolated I felt. getting out was difficult. Now that they've started to have many one-nap days I'm realizing how much it changes our routine. I basically have to keep them occupied from 7am until noon or 1pm. That's a long stretch with two little toddlers. Getting out is definitely key and I'm looking forward to reconnecting with the outside world. BUT, I didn't really think of how it would siginficantly reduce the amount of time I had to myself. My routine was generally to stay in my PJs until their first nap around 9:30am, put them down, often workout, shower, and fold some laundry. Then in the afternoon I would have some me-time, catch up on emails, do a few chores and think about dinner. It was wonderful. Now I only have a short amount of time to do everything that can't be done with two little ones in tow.

I value staying fit. I don't always love working out but I think it's important so I generally try to make time for it. Once I realized the realities of one nap I had to make a decision. Waiting to workout and shower at 1pm is not ideal. There are plenty of other things to check off the list during that time. So, my options have now become a) workout in the evenings, b) wait 'til the boys are in school and not workout for another 3 years with the occassional weekend one, c) get up earlier and get it done before the boys are up. A) wasn't really an option in my head. Evenings often have social things or just chill time with Joel. When the boys go down that's the last thing I want to do. B), I have to admit I did consider. How fat could I really get in 3 years? Although decent, I don't have the same metabolism as my teens and twenties and some level of maitenance is necessary. So sadly the most logical conclusion became C).

Now I am NOT a morning person. I live for Saturday sleep-ins. I naturally like to stay up late and usual no matter how tired I am something in me wakes up at 10pm and says it's time to play. I usually have lights out by 11pm so I can get my 8 hours in but if I had nothing to wake up for it would probably be much later. But I do want to work out (kind of), I do want to have time to myself to think, journal and pray and I'm pretty sure that means I need to get up an hour earlier. Arggh! So for the past few days the alarm has gone off at 6am. I know that's not extreme, that many get up that early, if not earlier, but for me it's a stretch. While it was still dark out this morning, I was having a little date with Jillian Michaels. I already feel tired and it's not even noon. I know my body will adjust and it will just mean getting to bed earlier. That will be the hardest part for me. In my heart I know I want to be a morning person and that it will feel good once I'm up. I just hope I can stick with it. Are you a morning person? What time do you usually get up?
Posted by Julianne at 10:51 AM

Good for you for fitting in that workout. I got my first early morning one in a long time done yesterday. 5:30 am for me. I am NOT a morning person naturally. In fact growing up the general consesus said leave her alone until at least 9 am unless you want your head bitten off. But since having kids, I have become a morning person. And now, gasp, I actually am starting to like it. Getting up before my kids is wonderful. A time to focus and prep mentally for the day. The quiet draws me. Of course I wish that getting up before my kids meant a 9 am start, but nope, I've got early risers. I blame their father. I'll think about you tomorrow morning and I'm finishing my session with Jillian, and give you encouragement from a far as you start!

Love that you are doing this! I have tried running with Vi after dropping Ro off at school, but she has been getting up so early, she is ready for her nap and falls asleep in the stroller = not good. I can't run at night (well, I could but the girls would have to bbsit themselves). :) Ditto for the morning. *Sigh*. I'm thinking I'm going to have to come up with a different method of exercising. Do you recommend Jillian? Now if Vi could only start to wake up at a consistent time so I could plan to wake up before her! (We have had anywhere from 4:30 to 7 in the past week).

It'd definitely tough. Tammy I definitely recommend Jillian Michael's... her workouts aren't too long and make you sweat. I currently do the 30 Day Shred and have another on deck.